How to Break Up With the Patriarchy

How to Break Up with the Patriarchy;

or, what witches can teach us about deprogramming ourselves

Part of getting deeper into my spiritual practice, and claiming myself (or perhaps reclaiming myself) as a witch, has been a divorcing of myself from patriarchal notions, control tactics, and measures of success.

So much of what I find valuable is not valued in the patriarchal world we live in. Some of these qualities are: generosity, independent thinking, independent learning, healing in all of its various ways, empathy, compassion, connecting to one's own imagination and innate creativity, becoming best friends with your magic and intuition, interdependent relationships, and self-empowered living.  However, greater patriarchy society rarely see these traits and actions as worthwhile. This is precisely because people who are their own thinkers, people who are not easily controllable and who are empowered, are panic-inducing to the overculture. We’ve seen this happen time and time again with the demonization of social justice movements and leaders. We’ve seen this for thousands of years with witch-hunts. Magical people are powerful, and this is why they are feared. This fear leads to control, and in many cases, violence.

Witch hunts were political, enacted for control over women’s bodies and labor, as well as Indigenous folks’ autonomy and knowledge (Silvia Federici, Caliban and the Witch). In Europe, the power in place was the church and the state; in America, it was the colonizers. (And, yes, is also now the church and the state.) These powers wanted even more power, attempting to control physical bodies and labor power. Witches were healers, community counselors, oracles, folk medicine women, sex workers, herbalists, doulas, and knowledge holders. They knew all about healing illness with plants, birth control, abortion, and saving lives. They passed this knowledge around to the community and to one another. So much of their magic was forged in this connection. This magic was created in collaboration with the elements, with spirits, with source, and with one another, outside of money or capitalist systems. This was terrifying to the state.

And so the war against witches, which was also the war against women, weirdos, gender non-conforming folks, and other non-compliant folks, began. Witches were sluts were power holders were deviants, in extreme rebellion against capitalism, and the notions of hierarchy and control that came along with it. And so this is how witches became inherently political. This is how witches, and all the other attributes of a witch—creative, sexy, knowledgeable, wild, intuitive, mysterious, psychic, intimidating, to name only a few—became demonized. To this day, we see the remnants everywhere.

In many cases, mass murders were carried out not just for control, but to eradicate these priceless forms of knowledge off of the face of the Earth. Know part of what we deal with as witches, as empaths, as conscious beings, part of our path is to reconnect with these practices and rituals. Being connected to the seasons, the Earth, and one another is to remember. Researching and enacting our ancestors’ knowledge and memories. Know that this remembering and reclaiming is where much of our magic lies. Know that part of the remembering may be in re-remembering the witch hunts, the burnings. Know that this might be a painful thing for your psyche to experience. Give yourself permission to begin healing this experience. Know that you are allowed to define your practices for yourself. Know that there is no wrong way to be a witch, so long as you remain connected and compassionate, so long as you remain committed to dismantling capitalist and patriarchal philosophies.

Narratives around witches and magic not being real or being evil are an attempt to erase our birthright by the patriarchy. Stereotypes around sensitivity being bad are designed to destroy us. We must resist these paradigms. It is no easy feat, even if we pick apart the shadow stereotypes of the witch: lonely, ugly, cruel, shunned, evil. We may be afraid to say the word because of these connotations. These stereotypes are toxic masculinity at its worst. They lead to dehumanization and violence. Kathleen Hanna famously proclaimed: “Resist Psychic Death.” As witches, that is what we have done and that is what we must continue to do. We see treasure where many see trash. We seek out pathways of survival when there are none easily available. Resist psychic death. Resist spiritual death. We start our healing with ourselves. We start with our breath. We follow through with our thoughts, our language, our actions. 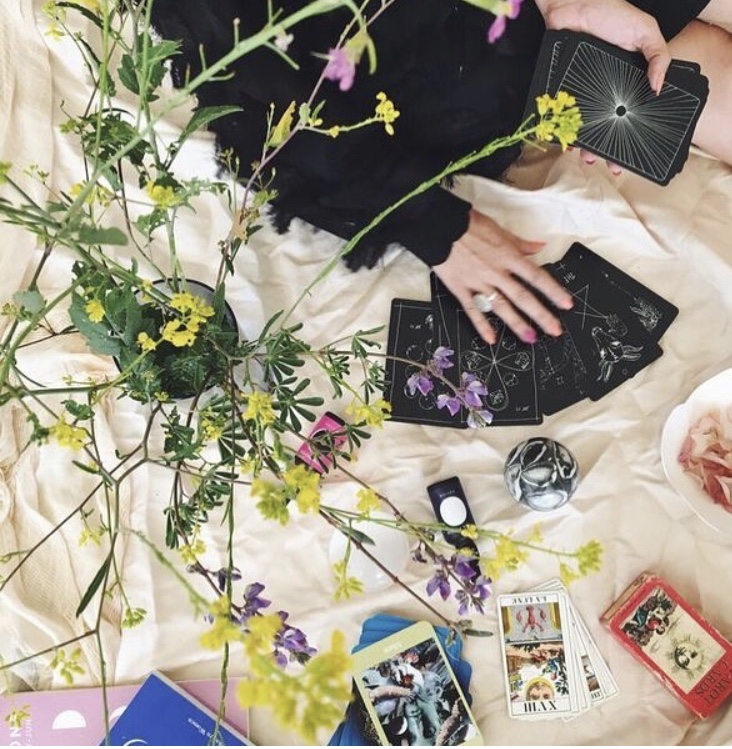 If we are to consciously deprogram ourselves from the negative, patriarchal, transphobic, capitalist, racist connotations associated with the witch and feminine identity, we must also take care to deprogram our magical practices in a similar way. Decommodify our witchcraft. Question our magical practices from top to bottom. Question our need to buy things, to consume things, and why. Question whom we are stealing from, and why. Question what sort of language and framing we are using in our communities and how that might need updates. For example: “white” being good and “black” being bad. Using “love and light” as an excuse not to look at racism, classism, ableism, transphobia, and misogyny, among others, that burden so many in our collective.

Think of the witch adage: Harm none. Obviously, in the system we are in, this task is an impossible one. But creating less harm is sometimes as easy as a pause. As simple as an inquiry. The real truth is that language is important. How we treat one another is important. What we do with our privilege is important.

It wishes to infect us with doubt and fear, and in doing so keeps us away from our magic. It brings in the aspects of commodification and extraction. While it harms our magic, it also harms ourselves. We are extracting from others. But within that, we separate ourselves from our pure knowing, our absolute intuition. Which is what the white supremacist capitalist patriarchy wants.

It is important to be mindful and conscious in the world of witching as much as it is anywhere else. Because if you are a witch, then you are very aware of intention and of consciousness around your thoughts. You are aware that as a witch you are in a relationship WITH nature, water, air, fire, animals, plants, yourself, your intuition, your guides, other humans, angels, ancestors, archetypes, and deities. You are aware that if this intention or relationship is imbalanced or misused, problems will arise. A witch must know the difference between cultural exchange and cultural appropriation. A witch must be able to define what they do and why they do it.

You can ask yourself: what aspects of my magical practice, process, or life are in direct opposition to the patriarchy? Does that make me nervous? Excited?

Where am I ready to claim myself, and in doing so, break up with the patriarchy? (Or, at the very least, intentionally decide to define ways in which I can act and love and connect and resist patriarchal control?)

My process of breaking up with the patriarchy is one that will last my entire life. It filters into every aspect of my existence: not just my magical world, or via my witch identity. How I run my business, how I try to conduct my relationships, how I value myself.

Like all radical and personal processes, I am often not rewarded when I take steps to live my life in accordance to my core beliefs. Things that disrupt the overarching methods of control, of normalcy, are threatening. I often have to confront that threatening feeling in myself: this topic alone could be a zine, or an entire novel! But in doing this, I reclaim myself. I reclaim what is mine. And I hope, that this inspires others to do so as well.

We are in a time where reclaiming what is ours. We are taking back what has been stolen from us. We can remember and we can tell new stories. We can create new practices that reflect our realities. Remember that there are always opportunities to listen and to learn. Remember that we are witches! Remember that we are strong, resilient, brilliant, and are most beautiful when we come together with love.

*As cited above, Sylvia Federici has inspired a lot of this thought. As has bell hooks, Riot Grrl, and a whole host of other thinkers and witches and artists —at a later date I will put together a resource list, or again, if it becomes a book or zine I'll go into my learnings with plenty of resources.