Diego Basdeo is a writer, astrologer, and queer youth advocate working in the Bay area. For the past 2.5 years, he has provided beloved astro overviews for each month of Many Moons. For this final edition, he also wrote about the archetype of Lilith.

What do I even say about this human?

It is impossible to put into adequate sentences.

I have learned countless things from this person. He expands my mind with just about every conversation we have. He's a brilliant thinker, an incredible writer, and really serves as both inspiration for ways to live and love authentically, and an example of what happens when truth meets compassion. Below, Diego talks Lilith, Moons, Astrology, and how utilizing the cosmos helped him helped at-risk trans and queer youth.

For the very last Many Moons, you not only provided your stellar astro overviews for each month, but you were were called to write a piece on Lilith and the Waning/Dark Moon. For you personally, what has connecting with Lilith offered you spirituality, and emotionally?

We love the moon, in it’s relationship to us, this earth, and the sun. Lilith is about loving the moon’s relationship to itself. Lilith has shown me a way out of the strange masculinist binary of sun (man) and moon (woman) relationship in astrology and spirituality. She has helped me explore my emotional range without judgement, to experience the righteous rage of being a survivor of sexual assault, and has shown me a way to embody complete wholeness with my shadow in all phases. Spiritually she has shown me that the places where my shadow brings me most shame is also a place of totally divine connection with others and integrating that into who I am in the world is to foster radically genuine and strong relationships. I often think of the song “beautiful liar” by Beyonce and Shakira and the revolutionary power of inverting petty revenge fantasies into a reality of sisterhood and by acknowledging our hurt and our desire for retaliation, we honor the true source of healing in connection with whole ass selves.

I love the moon, so I love Lilith.

This is a hard question. I really believe that the study of astrology is a math and science focused practice and the practice of it as a profession is an artistic and social one. We’re seeing a lot of social Astro but not enough math to back it up. I am seeing deep frustration from more seasoned astrologers with the way that astrology has entered popular culture. People are defensive of the title astrologer and the hard fought integrity it has held in past decades. I can totally understand it. I’ve been studying it for 6 or 7 years now and I feel like I am just now starting to really get it. To be an astrologer takes time, dedication, and a lot of practice — which means a LOT of self discipline because it is by and large an autodidact profession. The people who have been in the field 20, 30 years have put in a lot of work and have endured a lot of negative experiences because astrology wasn’t always so popular. They are frustrated with new astrologers giving bad readings for a quick buck because it is making it harder for folks who have dedicated their lives to the practice to maintain the reputation of their craft. That’s so real.

People have been finding ways to categorize each other for better or for worse since time began and this incarnation of astrology is no exception. The ethical grey area comes when people are giving readings to people without the due diligence of learning the craft. People often come to astrologers in a crisis, they come when they’ve exhausted all options, and they come seeking the particular help of centuries of ancestors meticulously plotting stars and correlating it with human behavior for help. Our clients are often in a vulnerable position. To give unfounded advice based on your intuition (however on point it is) under the guise of astrology is wrong. To charge real money for something you are not able to provide is wrong. You are taking advantage of someone who is seeking help. Stop.

AND, things change — and again, astrology is no exception. The way that people consume astrology has always been problematic and the way folks have been producing it has always been invented. While the documented practice of astrology is over 4,000 years old, Sun Sign astrology (the whole, “what sign are you” thing) was made up in 1930 by a British dude trying to sell his column to newspapers, and it didn’t even catch on in the US until the 1970s. It’s something someone totally made up and now is a somewhat respectable practice today.

And guess what? It works! It’s fun! So what’s wrong with highly relatable memes? Or really funny twitter poems? “What’s your sign?” has been a queer greeting for as long as I can remember and I love it. Some people in this world will never, ever, ever have an accurate reflection of themselves in the media or even in their own community. Astrology is here for that. As long as it keeps doing that, who cares? 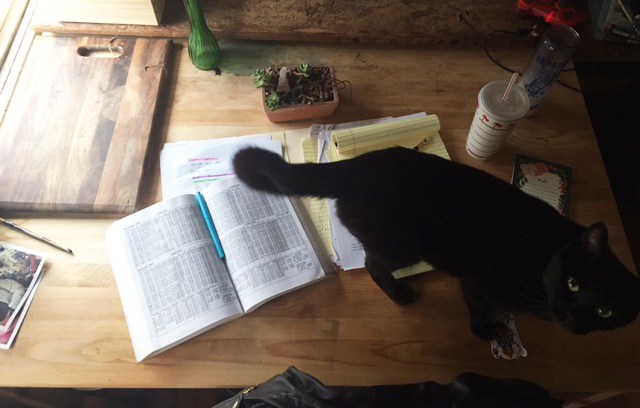 One of the ways that you've been working with astrology is by teaching foster youth how to do basic astrology. Why did you decide to make that shift? What are they learning, and what is that teaching you?

Truth be told, I got burned out on trying to build my business in Oakland and shit got expensive quick so I started looking for a job so I could get stable for a while. I got super lucky to get work with an organization that does advocacy for queer and trans foster youth in the bay area. During the first year of my work there I was offering chart readings as well as working part time as a youth advocate but because my job required so much emotional labor, client work became nearly impossible to continue. I decided to stop working with clients and devote my full attention to the youth in my community. Naturally I began talking to the youth about astrology and started giving a few workshops and tutorials to youth and providers. They responded so positively and I was eager to teach them more. It soon became unbearably clear the horrible conditions of their lives were in direct correlation to their identities and their behavior were in direct correlation to their conditions. These kids have no reason to believe they are good and don’t deserve the shit they get, and those that do,  do so against all odds. A lot of them struggle to see a way out of the pipeline they’ve been put into or imagine a world where they could flourish or even just exist.

I realized that I could teach them astrology as a tool to remove western colonial values from identity, and break down conflicts and challenges in to behaviors, emotions, and circumstances. Diasporic astrology can connect them with ancestral wisdom which can be used to guide their choices and give them a sense of agency in life as youth forced to make very adult decisions, and some decisions that adults will never have to make. Alternative storytelling methods give youth that experience multiple marginalizations more access to strengths that are not readily identifiable in mainstream culture.  From these building blocks, queer and trans youth can identify themselves and the people they love as humans with strengths, challenges, and overall journeys all on their own and wherever they are. They may be able to identify themselves as individuals and differentiate who they are from their circumstances and build their sense of self and belonging in the universe.

I’m learning that nothing in life is wasted. I think in some way astrology led me to doing youth advocacy work. The reason I got into astrology was because, like these kids, I had to move around a lot as a kid, I lost my parents for a good portion of my life, and I have no reflection of myself in my world. Astrology gave me an origin, a home, and a story. I wanted to share that with everyone that needed it, but it never felt right in the model of astrological work that exists right now. With this practice in my work as a foster youth advocate, we can all find mirrors in the stars, between the margins, and far, far away from home.

I know that in general, you are New Moon lover. Is that still true currently? Have you connected with another Lunar Phase as of late, what are the useful energies there for you?

Actually a conversation with you a few months ago made me think about this again. Recently, whenever I get a chance to moongaze, it usually lands on the last quarter moon. I’ve been getting a lot of closure on a lot of experiences I had in my 20s right now and the lessons are pouring down like manna. I’m so grateful for this time of stability and reflection on what I’ve built and what I need to let go of. Lots of lessons of detachment and self respect. I’m also anxious about the future. Things are closing, the lights are coming on, and it’s time to move on to something else. I have no idea what that is, or what it could require from me, but for now I am learning how to enjoy the work I’ve put in and letting it show me the way through.

The Multivrs is Illuminated! It’s Black, it’s brown, it’s art, and performance, and plur, and survival, it’s intergalactic, it is really important. Damn I don’t know how to describe them but here is a part of their vision statement:

This year the multivrs is illuminated we are embodying the futures that we want to exist in. We feel now more than ever is a time to transcend pain. Get free or die trying(getfreeorlivetrying).

Order the Many Moons Workbook here.

August 2020 Full Moon Tarotscopes July New Moon: All That Our Water Holds
Back to Journal
Use left/right arrows to navigate the slideshow or swipe left/right if using a mobile device